Read more about the life-saving work of the limpet for Canada’s Pacific marine life, and the research into their role in Canadian Wildlife magazine, Jan + Feb 2018 edition.

Or visit sciencemag.org for more on the research.

One of the most pressing questions facing scientists today, especially those focused on nature and wildlife, is how do we deal with climate change. Working in the intertidal (the area of the coastline between high tide and low tide) zones off B.C’s coastline, Rebecca Kordas, a research fellow at Imperial College in London, looked at how climate change can cause a drastic change to these areas. 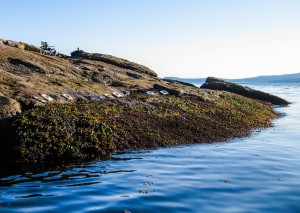 “Everything is connected and the community has kind of evolved over time to be dependent on each other. When you have everything there the community I much more diverse and higher functioning, but when you take just one species out, it has a huge effect.” – Rebecca Kordas.

These zones are home to a wide array of a tiny sea life, all living in harmony. Life near the rocky shore is perilous, but limpets act as ecosystem engineers, helping to protect creatures who live in this environment from shallow tides and rising temperatures. It is an important role they play. They act as lawnmowers, consuming algae which grows (with increased speed due to climate change), and allowing other species to survive and thrive.

Kordas’ paper, “Herbivory enables marine communities to resist warming”, examines the important role limpets have in the intertidal ecosystem, but they are not a miracle cure for the world’s climate change affliction. The key, according to Kordas in this report, is to preserve diversity in habitats.

Kordas cited the example of wolves being returned to Yellowknife National Park. A small population of wolves, when reintroduced, were able to limit the rapid growth of the caribou population, which allowed previously fledgling populations of trees to return, which ultimately changed the landscape and the flow of the rivers to how they had once been.

This is especially important in response to climate change, which can see creatures who live in these intertidal zones suffer.

“But in past years when there have been these heat waves, we have seen mass mortality events,” said Kordas. “For example mussels, when I first started my PhD died all along the coastline in this massive heatwave; I would suspect limpets would suffer similarly.”

How can this be avoided? Kordas said the steps that are usually suggested–reducing carbon emissions and clearing waste need to be taken to combat warming and acidifying oceans. Another important step would be to also introduce more marine protected lands.

“Organisms are dealing with ocean acidification and higher temperatures, but they’re also dealing with all this other crap such as overfishing,  and toxins and pollutants. If we can reduce these stressers by providing protected areas, that’ll be good for the animals.” – Rebecca Kordas.

“Some of these areas take so much work, policy change in massive areas [like cutting emissions], but there are these kind of low hanging fruits which we can reach for in the meantime to reduce stress.”