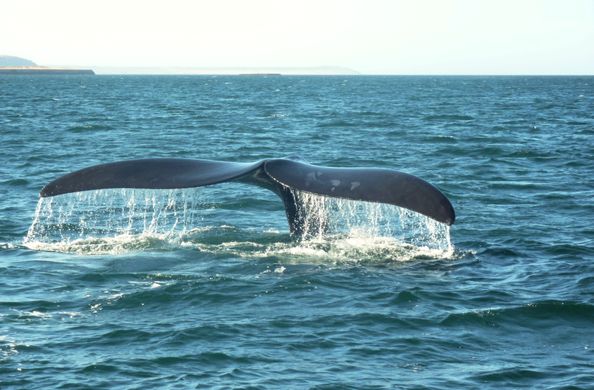 Canada is fortunate to have the longest coastline of any country in the world. The thousands of kilometres of open sea house many marvellous creatures. Unfortunately, those open seas may not be as open as they once were; they are now filled with marine litter and discarded fishing gear. Smaller creatures find it easier to slip through the gaps, but animals such as the North Atlantic right whale are particularly vulnerable to entanglement.

Often times, whales cannot free themselves. Because of this, whale disentanglement teams, often case made up of volunteers who dedicate to their free time to saving whales, must come to the rescue.

For many marine animals, this marine litter has become a huge problem to their survival. Becoming entangled in an old fishing net or being snagged by an old anchor can mean death for many animals. Smaller creatures find it easier to slip through the gaps in the waste, but for the North Atlantic right whale, this is not so easy.

2016, was a record year for entanglements, with 46 cases reported along the Eastern seaboard. According to recent studies, 83% of right whales have scars from at least one entanglement, another 59% have scars from two. Many cases go unreported because of the vast range these animals cover and the spread of marine litter they may come into contact with.

The right whale is endangered under Canada’s Species at Risk Act, with only around 450 remaining. Its name comes from the idea that it was the “right whale” to hunt, and despite efforts to ban hunting, the practice still continues in some parts of the world.

12 died last year because of entanglement, and no new calves were born, according to Dr. Sean Brilliant, a marine biologist with CWF. 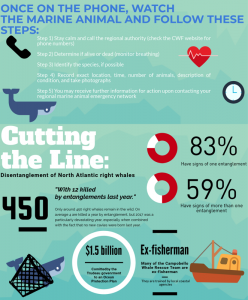 When right whales do get entangled in marine litter, if they are not killed quickly they often drag the gear around for thousands of miles behind them. This can mean they cannot dive for food, or in some cases reach the surface for air. It also means they expand more energy swimming because of the drag caused by pulling the fishing gear behind them.

As they swim, the ropes wrapped around them can tighten, cutting into their skin and bone and stopping circulation to their fins.

Freeing themselves from these ropes and nets, which are designed to be tough as to trap fish can be nearly impossible for whales. That is why, teams of trained volunteers, such as the Campobello Whale Rescue team located on Campobello Island in the Bay of Fundy. The team is one of several small groups of dedicated locals who give up their free time and work schedules to help rescue entangled whales who have been spotted offshore.

Approaching an up-to 50-tonne creature who has been injured can be extremely dangerous.

“The whale could have easily swamped or capsize our boat,” said Jerry Conway, a member of the Campobello team. “I like to think it realized we were trying to help it.”

The help these volunteers provide is vital for the survival of entangled whales. It is not easy though. Funding is hard to come by, and resources (people, boats and other equipment) are too sparsely spread to be able to deal with all the entanglements.

Luckily, because of right whales’ endangered status, concerted efforts are being made to help protect them, including the Trudeau government’s $1.5 billion Ocean Protection Plan.